Mr. Daniel Earle, President & CEO, commented: “Warintza is blessed with simple metallurgy that readily returns high recoveries of critical minerals from standard flotation processes into high-grade concentrates free of deleterious elements. Historical testing reported high recoveries of over 90% for copper and 70% for gold; our testing has reproduced these results and established high recoveries for molybdenum of over 80% at a time when molybdenum prices recently eclipsed $30/lb due to structural supply issues in the sector.”

The metallurgical samples were taken from three drill holes specifically drilled for metallurgical test work. The hole depths range from 500m to 960m with sample selection ranging from 46m below surface to a depth of 450m. Seven samples which consisted of 20m intervals of half core were selected for the test work program for a total weight of 651kg of sample material. The samples were selected from the Warintza Central deposit to represent the mineralization, metal grades, and lithology type which formed the first pit phases of the MRE. 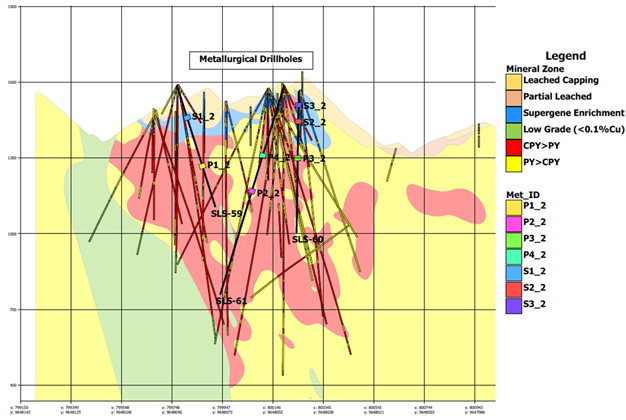 The metallurgical samples were combined by mineralization type and classified as supergene and hypogene which formed two master composites (“MC”) for the flotation test work program. MC #1 represents the supergene material and MC #2 represents the hypogene material. Each MC was assayed to confirm the metal grades are within range of the grades expected in the first phases of a potential mine plan. The head grades for each MC can be found in Table 3.

Batch cleaner tests were conducted to ensure that bulk concentrates could be produced without significant cleaner losses. One cleaner test was conducted on MC #1 and four cleaner tests were conducted on MC #2, with regrind size being the most significant variable tested. A second set of master composites were created with the same blend of variability samples as the original master composites labeled MC #1B and MC #2B and were used for seven locked cycle tests and copper-molybdenum separation tests. Batch cleaner and locked cycle testing produces high recoveries for the supergene composite of 90% Cu and 83% Mo and hypogene composite of 89% Cu and 75% Mo. FLS concluded that higher recoveries could be achieved for MC #2 and #2B with reagent optimization, which will be incorporated into the next phase of testing.

Sample assay results have been independently monitored through a quality control/quality assurance (“QA/QC”) program that includes the insertion of blind certified reference materials (standards), blanks and field duplicate samples. Solaris employs a QA/QC program consistent with National Instrument 43-101 Standards of Disclosure for Mineral Projects (“NI 43-101”) and industry best practices. Logging and sampling were completed at a secured Company facility located in Quito, Ecuador. Drill core is cut in half on site and samples are securely transported to ALS Labs in Quito. Sample pulps are sent to ALS Labs in Lima, Peru and Vancouver, Canada for analysis. Total copper and molybdenum contents are determined by four-acid digestion with AAS finish. Gold is determined by fire assay of a 30-gram charge. In addition, selected pulp check samples are sent to Bureau Veritas lab in Lima, Peru. Both ALS Labs and Bureau Veritas lab are independent of Solaris. The drillhole data has been verified by Jorge Fierro, M.Sc., DIC, PG, using data validation and quality assurance procedures under high industry standards. For the metallurgical test work at FLS, the ALS labs assay results were used by FLS to produce seven sample composites from the remaining sawn half core to best represent a range of locations within the Warintza Central deposit. The remaining half core was sampled by Solaris staff, bagged and sent to FLS at FLS’ laboratory in Salt Lake City, Utah. The metallurgical test work described in this release was performed by FLS. All sample preparation, solution and solid assaying and metallurgical studies were performed utilizing accepted industry standard procedures. FLS conforms to the requirements of ISO/IEC 17025 and is accredited by the Standards Council of Canada for the specific tests undertaken. FLS is independent of Solaris. Solaris is not aware of any drilling, sampling, recovery or other factors that could materially affect the accuracy or reliability of the data referred to herein.

The scientific and technical information in this news release has been reviewed and approved by Jorge Fierro, M.Sc., DIC, PG, Vice President Exploration of Solaris who is a “Qualified Person” as defined in NI 43-101.  Jorge Fierro is a Registered Professional Geologist through the SME (registered member #4279075).

On behalf of the Board of Solaris Resources Inc.