By Brisco CapitalJanuary 7, 2020No Comments 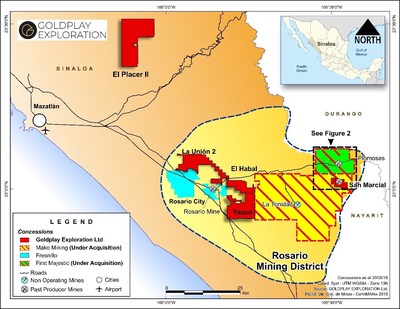 The definitive terms of the transaction are subject to negotiation and are expected to include: (i) a $100,000 cash payment to First Majestic; (ii) the grant of a 2% net smelter return (NSR) royalty to First Majestic on the Plomosas Project with half of the NSR (i.e., 1% NSR) being subject to a buy-back option for US$1,000,000; and (iii) the issuance to First Majestic of that number of common shares of Goldplay as is equal to 19.9% of the total issued common shares of Goldplay (calculated after giving effect to the issuance of such shares)(the “Purchase Shares”). It is anticipated that the Purchase Shares will be subject to a voluntary hold period such that 1/8th of the total number of Purchase Shares will be released from such voluntary hold period every 3 months after the date of closing. It is also expected that First Majestic will enter into a voting trust agreement with Goldplay pursuant to which it will agree to vote the Purchase Shares in favour of management’s recommendations on routine matters at any annual general or special meeting of shareholders for a period of two years after the closing. It is also a binding term of the LOI that, for a period of two years from the date of signing of the LOI, First Majestic will not, without the prior written consent of Goldplay, acquire such number of common shares of Goldplay that would result in it owning 20% or more of the issued shares of Goldplay at any time during such period.

Under the LOI, the parties have agreed to a binding exclusivity and non-solicitation period which will terminate on the earlier of 60 days from the date of signing of the LOI, the date of execution of a definitive agreement or the termination of the LOI. The parties are now moving forward with their respective due diligence reviews of each other during the 60 day period. The entering into of a definitive agreement will be subject to certain conditions such as each party being satisfied with its due diligence of the other, board approvals, any required governmental, regulatory and third party approvals and no material adverse event or change in respect of Minera La Rastra or Goldplay.

Goldplay’s CEO, Marcio Fonseca stated, “We are delighted to continue toward our corporate mission of becoming the first company ever to consolidate key assets in the Rosario Mining District. Goldplay is poised to secure an attractive resource stage expansion portfolio with excellent infrastructure for future project development. The extensive exploration data base combined with historical operational data, provide a wealth of technical information (geology, geochemistry, geophysics, drilling, Landsat/structural studies, historical metallurgical and operational data) on the Plomosas Project. The value of the extensive exploration database and potential upside of this asset cannot be understated, as it provides an opportunity for Goldplay to achieve new discoveries and delineate new resources in the Plomosas Project. Goldplay is focused on acquiring, at low cost, assets with good infrastructure and potential resources requiring a minimum of time and money to expand and advance to development. Our recent success expanding the resource at the San Marcial Silver-Gold Project has brought fundamental knowledge of the silver and gold mineralization in the Rosario Mining District. This knowledge will allow Goldplay to implement a cost-effective exploration program at the Plomosas Project in 2020 with the objective of future discoveries and resource delineation.”

The 8,514-ha land position of the Plomosas Project is strategically located within 5 km of Goldplay’s San Marcial Silver-Gold Project. It is located approximately 94 kilometres southeast of Mazatlan in southeast Sinaloa State, Mexico and is adjacent to the town of Rosario (Figure 1). The Plomosas Project includes infrastructure such as: a 60 km – 33 KV power line (connected to Mexican Regional Power grid), offices, shops, 120-man camp, infirmary, warehouses, foundations for processing plant, and other key infrastructure which can be fundamental for future project development (click here to view photos). The Plomosas Project also is entitled to a surface rights agreement, water use and surface exploration permits.

The Plomosas Project includes five shallow past producing underground mines – the Plomosas-La Cruz mine, San Juan mine, La Colorada mine, El Huarache mine, El Saltito mine – and 11 exploration targets (Figure 2). Grupo Mexico operated a 600 tpd crusher/mill/flotation processing circuit from 1986 until 2001. The processing plant feed was mainly sourced from the Plomosas-La Cruz historical underground mine, producing zinc and lead concentrates with silver-gold credits. Historic production reports by Grupo Mexico indicate that a total of 2.5 million tonnes of ore were extracted which averaged 190.5 grams per tonne (g/t) silver, 0.92 g/t gold, 2.02% zinc and 2.38% lead. 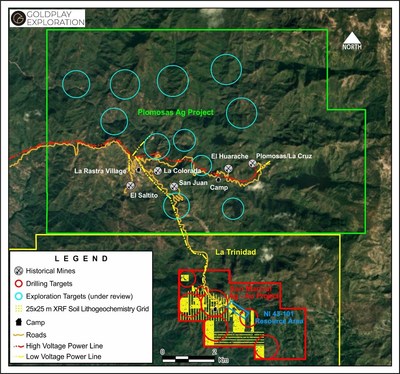 This announcement marks the second strategic LOI signed by the Company in the past three weeks. The news release dated December 17, 2019 announced the signing of an LOI with Mako Mining Corp. (“Mako“) which granted the Company the exclusive right to acquire 100% of the issued shares of Mako’s wholly owned subsidiary, Marlin Gold Mining Ltd. (“Marlin“), until December 20, 2020. Marlin owns, amongst other assets, Oro Gold de Mexico, S.A. de C.V., a Mexican company that owns the La Trinidad gold mine facilities, currently being decommissioned.

Goldplay will provide shareholders with updates on the status of these transactions when material information becomes available.

Goldplay has applied to the TSX Venture Exchange to change its name to reflect its focus on silver in the Rosario Mining District. The Company believes its proposed new name will reflect its evolution, the consolidation of advanced-stage assets in the Rosario Mining District, Sinaloa.  More details on the name change will be provided as soon as confirmation of its acceptability is received from the TSX Venture Exchange.

The scientific and technical data contained in this news release was reviewed and/or prepared under the supervision of Marcio Fonseca, P.Geo., a non-independent qualified person to Goldplay Exploration Ltd. who is responsible to ensure that the geological information contained in this news release is accurate and who acts as “qualified person” under the National Instrument 43-101 Standards of Disclosure of Mineral Projects.

Goldplay has successfully consolidated a district-sized portfolio, owning >250 sq. km of mineral concessions in the historic Rosario gold-silver Mining District in the state of Sinaloa, Mexico. Its flagship project, San Marcial, consists of a 1,250-ha land package located south of the La Rastra and Plomosas historic mines. San Marcial is a near-surface, high-grade silver, lead, and zinc open pit amenable project for which a NI 43-101 resource estimate was completed by Goldplay in early 2019. Additionally, high-grade gold was drilled in July 2019 at San Marcial, opening up the potential for further gold success. Goldplay’s 100% owned El Habal precious metals project is located 20 km west of the San Marcial Project. It comprises 3,700 hectares and is located 75 km southeast of the modern coastal port of Mazatlán, and 10 km on a paved road from the historic mining town of Rosario, Sinaloa, Mexico.

Goldplay’s current focus includes expanding its NI 43-101 resource estimate at the San Marcial project, which contains 36Moz Ag Eq (indicated) + 11Moz Ag Eq (Inferred), by defining new high-grade gold and silver targets along the project’s 6 km mineralized trend. Goldplay is the first company to perform exploration work at San Marcial in over 10 years. It is a low-risk development stage project, fully exploration permitted and supported by the local communities to carry out all proposed exploration activities. Only 500 m of the 6 km trend has been drilled to date, highlighting the significant potential for further discoveries. The Company has identified 8 high-priority targets along the 6 km trend and is currently drilling two high-priority targets at Faisanes and Nava. Some of these exploration targets consist of old shallow pits, caved shafts and historic shallow underground workings in areas with extensive hydrothermal alteration, hosted by major regional structures in a felsic volcanic environment. Mapping and sampling by Goldplay have revealed evidence of dacite-rhyolite dome structures in a highly prospective geological environment for additional high-grade gold and silver discoveries.

Goldplay’s team has over 30 years of experience with senior roles in exploration, financing, and development in the mining industry, including over ten years of extensive exploration experience in the Rosario Mining District, leading to previous successful discoveries.

The NI 43-101 reports for each of the San Marcial and El Habal Projects are available on SEDAR.